THE RIGHT TO ARM BEARS 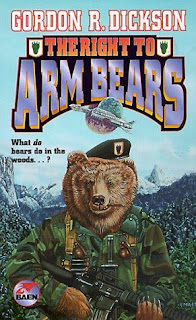 I needed to fully cleanse my mind after the horrors of Cat Fancy, so I headed for safer waters in the realm of science fiction. Just look at this cover? How could this be less than awful?

The Right to Arm Bears by Gordon R. Dickson

Expectations:
Awful pun for a title. A bear with an AK 47, smoking a cigar with some kind of bear half-smirk. Spaceship in background... my guess was aliens use some kind of technology to make bears smart enough to be the ultimate guerrilla warriors? Oh, boy- look at that tagline. I bet there's irreverent poop jokes abound. (Please, no bear sex).

What I got:
What? Wait... this was basically a compilation of three small books collected into one novel. There are no guns in the whole thing. There are no bears smoking or wearing berets. Each story was a very politics-heavy story about a human thrown into a foreign planet where... bears have a very primitive and twisted honor-based code of ethics and behavior. There's some other aliens too, and they want to be friends with the bears first. It's like each story was the same. Human gets in trouble. Human has to fight a 9 foot tall bear-man to retain honor for all humanity. Other aliens try to make humans look bad. Human somehow tricks bear into losing the fight and humans get respect. NO GUNS. NO CIGARS. NO CAMO.

Cover Execution:
1.5/10
Total fail. The only thing that was correct is there's a spaceship mentioned at some point and the aliens look like big bear people. I can only imagine the publisher realized how damn hard it would be to market a serious bear-space-politics book and just gave up and put a "totally awesome bear like Che Guevara on the front and like, puns and, like a poop joke". I was seriously upset to not have bear gun wars as promised.
Posted by Reagan at 1:04 PM