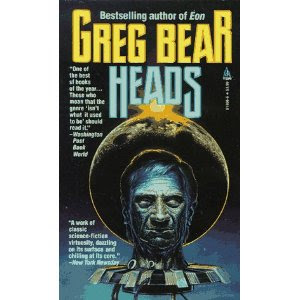 What I got:
A very good book exploring an interesting vision of the future and a set of cultures/political groups residing on the moon. The book delivered not one massive head but 410 frozen heads, in addition to a rather clever and biting attack on cult religions ::coughcoughSCIENTOLOGYcough:: and cool negative-time experiments. And an ending I had to read twice for full effect.

Cover execution:
7/10
The theme was there, but the forced perspective left me hoping for some Galactacus-esque head that would eat the moon or something. Also, if that's supposed to be the main head causing the source of contention in the book, it's sadly not accurate in depiction. If it was the head I'm thinking the illustrator intended, it would be an obese person's head, not this trim icy visage. Also, lack of cooling station allusion- which plays a more important role in the book almost, than the heads.

Still, frozen head on the moon is the gist of it.
Posted by Reagan at 4:57 PM