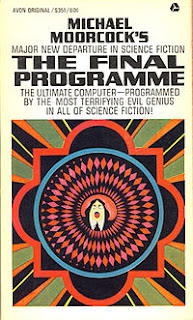 Well. I'm back to reading a few things. This was another book lent to me for perusal due to a hideous cover design. It actually has TWO covers. I'm not sure if they didn't know which one was worse or what, but I've not seen a book with two covers in a while. Also, MICHAEL MOORCOCK. We're in for a trip.

THE FINAL PROGRAMME by Michael Moorcock.

Expectations:
This dude is HORRIFIED by the terrible 70's quilt! EVERYTHING IS WRONG HALP. I seriously have no idea. I tried to ignore the text and just pay attention to the small screaming man in the middle of an eye-offending design.

What I Got:
I admit it, I was so desperate for a book to read I embraced this like a hobo clutches a stray PBR he's stolen from a college party. It read like a series of screwed up British dystopian short stories centered around a very unlikable rich jerk who has quite possibly, the most messed up adventures ever.
Jerry Cornelius dandies around future London in smart jackets and fancy cravat shirts, engaging in all kinds of odd promiscuity and indulgence. He gathers some guys to break into his deceased father's house so he can kick his brother Frank's ass and rescue his sister/lover Catherine. Yeah, so sideline there... he's doing his sister. Great. Anyway, he ends up shooting her to death with his needle gun on accident and that whole plotline goes away. Thank God. The second plot is that Jerry's father was working on some crazy research that some of these housebreakers want; particularly Miss Brunner, who is some kind of cross between a snarky school marm and a succubus. She sexes people and absorbs them in some way not quite explained. She's also kind of badass... like a White Court Vampire and a CS major in one.
After Frank gets away and Jerry is left shot up with needles, he's rescued by Miss Brunner. Brunner clearly has some thing for cravats because she's all about trying to get Jerry to go catch Frank and get this programme data she's trying to acquire for some sort of nebulous purpose Jerry doesn't think too much about because he's a huge idiot, despite his witty one-liners. There are Nazis and a secret base and more parties. And more parties. And humanity's decline.
While mankind is destroying itself Jerry and Miss Brunner are traipsing around in Elysian fields while the programme completes. In the end Miss Brunners stunning "final programme" is to get sexytimes on with Jerry, and for some reason they combine into one androgynous new god of mankind. They lead the whole of the UK populace into the sea and then decide to go take over the US. End book.

I AM NOT MAKING THIS SHIT UP.

Cover Execution:
1/10
WTF. I have no idea. I guess if I knew I was going to get assaulted and turn into an androgynous world-redeeming god I'd be screaming too. So that's what the point is for.

PS: Some things that come up in this book...

Driving in a car drinking scotch like it ain't no thing
Swedish girls
The worst nightclubs ever
White paint co-ed wrestling
Psychedelic attack lights
Butt-slapping everyone
Underground caves
If you see a computer that says DUEL on it, destroy that shit and run