WHEN HARLIE WAS ONE 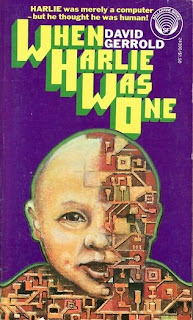 So, it was time to stop reading any book that claimed to have anything to do with cats. Now was the time to tackle literary BABIES; probably my least favorite thing other than perhaps, literary monkeys. This hideous cover delight was a birthday present- so I felt compelled to read it. Steeling myself for the worst, I entered baby HARLIE's world.

When HARLIE Was One by David Gerrold

Expectations:
I first assumed this was a book about quilting and babies. Then I realized this was one of those covers from the 1970s when pastel bookcovers with earth-tone pattern were totally groovy... and that was actually some kind of representation of a chip board. This made me feel better, because robot babies aren't actually babies and aren't as scary. They tend to be particularly intelligent and usually turn on their human creators. Unless they also look like babies and then they are even more terrifying. This book must be about a rampaging killer cyborg baby! Oh God what have I done?!

What I got:
Oh. Well. Firstly, HARLIE is not actually one. It's more like ... 8 in developmental years. So, not a baby. Also, a supercomputer that takes up a whole room. So, it clearly isn't a baby. Whew. The plot revolves around a painfully reserved scientist having very long, very deep conversations with a computer, who is mastering the process of being "human". HARLIE the computer spends about a chapter discussing love, another discussing rationality, and a few more discussing morality. The best part is when the computer learns to get high by dumping its memory with artistic and irrational logic and starts spouting poetry. I'm actually going to say the book was a bit tedious, but interesting. If you like having conversations with computers all in CAPS LOCK. BECAUSE HARLIE TALKS IN CAPS LOCK.

Cover Execution:
1/10
Seriously? There were no babies, and you can't tell me that pattern looks a thing like a circuit board. No babies at all. And the book was far from horrible. I escape this adventure relatively unscathed.

Email ThisBlogThis!Share to TwitterShare to FacebookShare to Pinterest
Labels: not BABIES, not horrible